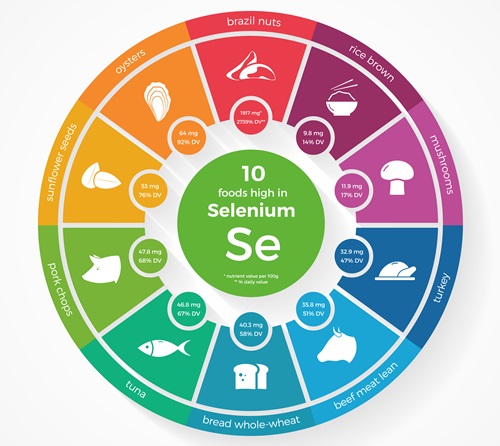 Selenium is an essential mineral which is found naturally in soil and water. It is considered a “trace” mineral because it is only required in very small amounts for healthy living. Like vitamins C and E, selenium has been shown to be a potent antioxidant which helps protect your body (and bones!) from the damaging effects of free radicals. It has also been shown to improve your immune system, protect against arthritis, maintain normal thyroid function, and it also plays a role in male and female fertility.

How Much Selenium Do You Need?

With the typical American consuming 100 micrograms of selenium each day, selenium deficiency is very rare. However, certain populations in Asia, Africa and Europe have been shown to struggle to get their daily needs through diet alone.

The RDA of selenium for both men and women is 55 micrograms each day. The safe “upper limit” for selenium is 400 micrograms daily, which would include both selenium consumed through your diet as well as supplements.

Selenium Deficiency Is Associated With These Diseases

Selenium and Your Bones

Researchers have discovered a link between selenium and healthy bones. Selenium is a necessary building block of several antioxidants (including glutathione peroxidases and thioredoxin reductases) which work together with other antioxidants to protect your bones from the damage and inflammation caused by free radicals. When selenium levels are low, this sets the stage for bone damage to occur.

When your bones are attacked by free radicals, they respond in a way that leads to fewer bone-building osteoblast cells, and at the same time increases the activity of bone-breakdown osteoclast cells. This combination has been shown to make bones more likely to break. Let’s take a closer look at the studies which have provided insight into the link between selenium and your bones.

Selenium Deficiency Is Associated With An Increased Risk Of Fractures.

The link between antioxidants and bone health is certainly promising, and a clear connection is undeniable. What we need now are studies that are specifically designed to see if supplementation of antioxidants can directly decrease the risk of breaking bones in people with osteoporosis. Until then, it makes sense to at least get the RDA of antioxidants (including selenium, vitamin C, and vitamin E) through your diet and supplements. There is not enough information to support relying solely on antioxidants as a treatment for your osteoporosis.

How Can You Get More Selenium Through Your Diet?

Selenium is found in a variety of sources including nuts, fish, whole wheat grains, meat and dairy. Take a look at the following list to find ways to improve your selenium intake.