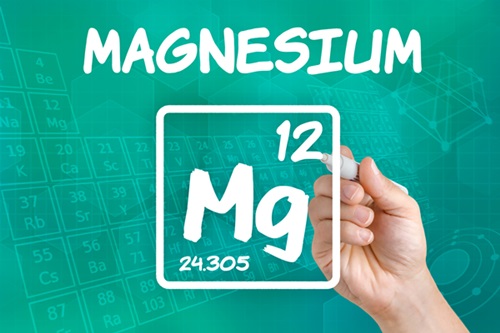 Magnesium is one of the most important minerals in your body. It plays a role in over 300 different biochemical functions, including the formation of protein and nucleic acids, energy production, signaling between cells, regulating electrolytes (including sodium, potassium, and calcium) as well as aiding in bone structure and strength.

How Much Magnesium Do You Need?

Despite the importance of magnesium, studies dating back to 2001 and 2005 have shown that 48%-56% of the US population is not consuming enough magnesium to meet their daily needs!

The recommended daily allowance (RDA) of magnesium is 400-420 mg for men, and 310-320 mg for women. The safe “upper limit” for magnesium intake is not known and few studies have been performed to give us guidance. The current recommendation is to avoid more than 350 mg per day of supplemented magnesium unless instructed by your medical provider. Magnesium intake higher than the RDA is unlikely to cause any significant adverse health consequences unless you have underlying medical conditions such as kidney disease.

Magnesium Deficiency Has Been Associated With These Diseases

Magnesium And Your Bones.

Magnesium needs to be maintained within the proper range to help protect your bones. Both too little and too much magnesium have been associated with weak bones and an increased risk for fractures.

Magnesium Deficiency and Your Bones

Your bones are composed of two things… The first is collagen, which provides your bones with a flexible framework. The second is a mineral component known as hydroxyapatite, which hardens and strengthens the framework. The primary mineral in your bones is calcium, which is stored within hydroxyapatite crystals. Magnesium has been shown to influence the structure and strength of these mineral crystals. When your magnesium levels are low, then newly formed crystals are larger and more brittle… which means your bones may be more likely to fracture!

Very low levels of magnesium have also been shown to decrease the activity of parathyroid hormone, which may weaken your bones by lowering your body’s supply of calcium and vitamin D. In addition, rodent studies have shown that low levels of magnesium may also DECREASE the activity of bone building osteoblasts and INCREASE the number of bone breakdown cells known as osteoclasts, leading to bone loss over time.

Researchers have been busy at work with a number of studies that have shed light on the importance of magnesium in building and maintaining a healthy skeleton. Few of these studies have been specifically designed to truly isolate the effects of magnesium, but the cumulative knowledge that we have gained has been promising.

Magnesium Excess and Your Bones

Far less is known about the relationship between high magnesium levels and bone health. What we do know is that elevated levels appear to have a negative impact on bone density and may increase your risk for fractures. This association was discovered during the Women’s Health Initiative Study when researchers found that women whose magnesium intake was in the top 20% of the group had the highest number of wrist fractures. It is believed that high magnesium levels may make it more difficult for your body to make strong hydroxyapatite crystals and also impair bone metabolism.

How Can You Get More Magnesium Through Your Diet?

With around 50% of the US population being deficient in their magnesium intake, we should all take an honest look at our diet and make some basic changes when possible. If you drink water throughout the day, this likely provides about 10% of your daily magnesium needs. Foods with the highest magnesium content include green vegetables, nuts, seeds, and unprocessed cereals. Processed foods are notoriously low in magnesium. Check out the list below to discover how much magnesium you can find in different types of foods.