By OsteoAdvisorDecember 2, 2017The Bone Bandits 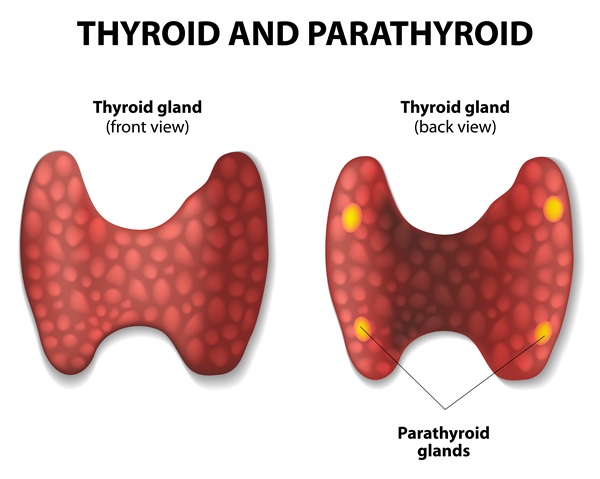 The parathyroid glands are four small glands that sit on the backside of your thyroid. They are the watchdog of your body’s calcium levels, and they make sure that these levels stay within a tightly controlled range. This is actually a very important job since calcium is needed not only for strong bones, but also muscle contraction, blood clotting, and transmission of nerve impulses.

Primary hyperparathyroidism is a condition where at least one of the parathyroid glands goes rogue. Instead of releasing parathyroid hormone ONLY when your calcium levels are low, it continuously produces a large amount of the hormone. This leads to bone breakdown and an increased risk for fractures. Approximately 1 to 7 people out of 1000 are impacted by the disease, and if left untreated, it can have a devastating impact on your bones!

How is Hyperparathyroidism Diagnosed?

In years past, if you had hyperparathyroidism you were likely to develop symptoms including bone pain, muscle weakness/fatigue, kidney stones, and mental disorders including depression, mood changes, and impaired memory. We are now much more likely to catch the disease early in its course, well before these symptoms develop, because blood calcium levels are routinely checked as part of a common lab test. If your blood calcium levels are incidentally discovered to be even somewhat elevated, this prompts us to check other labs to confirm the diagnosis of hyperparathyroidism.

Hyperparathyroidism is diagnosed using the intact parathyroid hormone (iPTH) and blood calcium lab tests. Other tests may be included to make sure that there are no other possible explanations for elevated parathyroid hormone levels, including your vitamin D levels, magnesium, phosphorus, and kidney function tests.

How Does Hyperparathyroidism Impact Your Bones?

Your bones respond to consistently high levels of parathyroid hormone by increasing the activity of your bone breakdown osteoclast cells. Calcium is pulled from your bones and released into your bloodstream, which causes your bones become thin and weak. Studies have shown that up to 60% of people with primary hyperparathyroidism have osteoporosis. If left untreated, your risk for broken bones increases two to three-fold compared to the general population.

How Can Those With Hyperparathyroidism Improve Their Bone Health?

Treating the condition by surgically removing the abnormal parathyroid gland typically improves your bone density and may even eliminate your need for other osteoporosis treatment. If your fracture risk remains high even after surgery, then osteoporosis medications may still be necessary to protect your bones.